Cheryl and I are now back in the UK, for a short stay at my parents, before a quick tour of the UK visiting friends and family.

We were both very sad to be leaving Burlington after living there for the best part of five years. We hope to have a big re-union trip with as many of our US paddler friends soon.

Jus prior to our departure, we travelled down to Washington DC to view the sights, and to sign out of the US tax system. We also got to visit the Air and space Museum, which wa smuch more fun than the tax stuff... 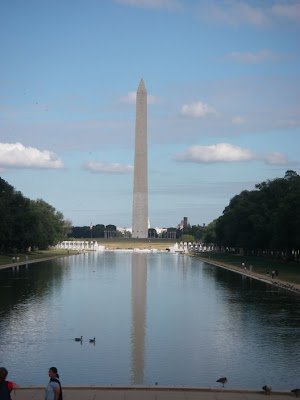 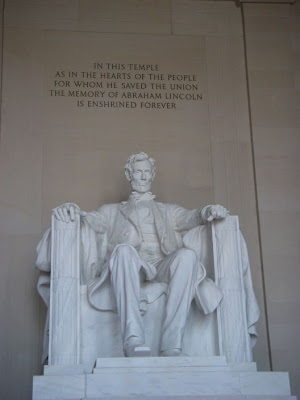 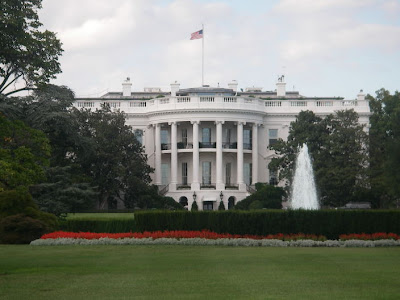 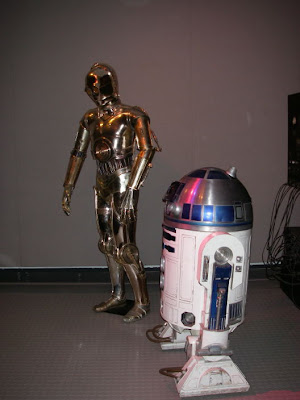 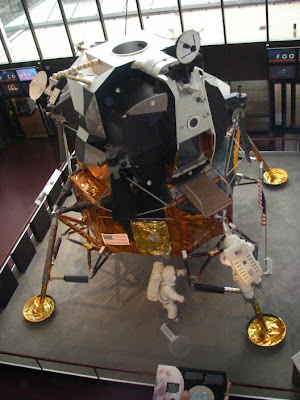 A final meal at American Flatbread, on Friday, and a Jonny Adler lakehouse special party on Saturday, meant that we were leaving with very fond memories and sore heads. 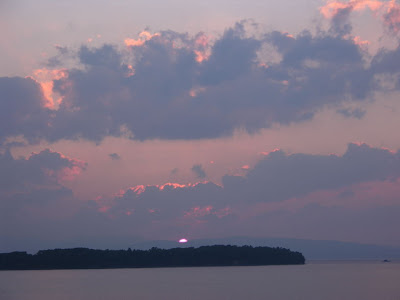 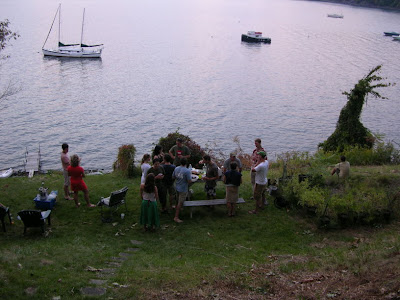 Our depearture from the US (well Montreal) was very smooth. British Airwary were very helpful. Between us we had three kayaks, and 6 large bags, which was a record for me, and quite a handful to actually get to the check-in desk with. Travelling business class certainly aided the check-in of the luggage, and we didn't have any issues at all.

Look forward to catching up with everyone we can over the next two weeks.
Posted by Si and Cheryl at 12:06 PM 1 comment:

Farewell Astro...you will be missed!!

Today is a very sad day for us, Astro has departed with her new owner..
She will be missed : ( 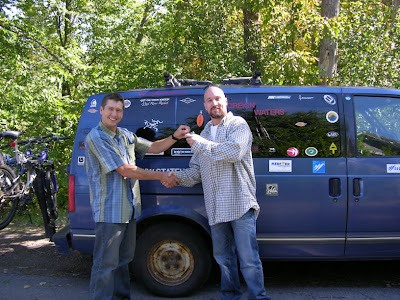 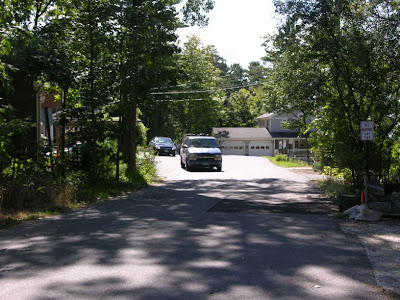 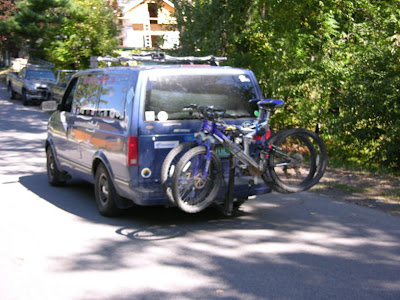 
Contary to myth...Cheryl was not drinking from her new booties..but very old slimey ones.
We have also updated the webshots albums with Our Drive East and another for Paddling back East... lots of really good photo's. Use the Our Pictures link on the right side
Posted by Si and Cheryl at 5:52 PM 2 comments:

As we head in to the final weeks of our US/ Canada leg, we decided to head into to Quebec and experience some of it’s finest rivers and most grueling shuttles.
Joined by Ed, Trip and Robyn we headed to the Jacques Cartier for the Taureau. One of Quebec classic class 5 creeks and the perfect way to start the weekend.
Cheryl did the shuttle and was excited to find a Mother and Baby Moose munching weed in the Jacques Cartier river. 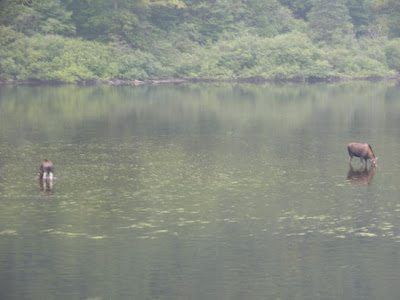 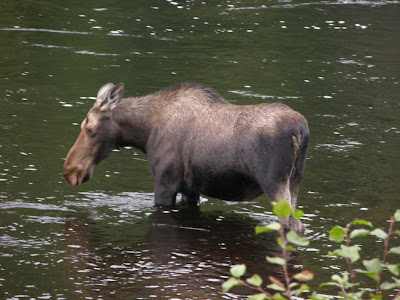 Saturday we headed to the Malbaie, Thank God for Ed’s truck who took much of the brunt on the shuttle in and out.

The Malbaie is another classic, 10 miles of wilderness creeking and a mighty fine 30ft waterfall thrown in. 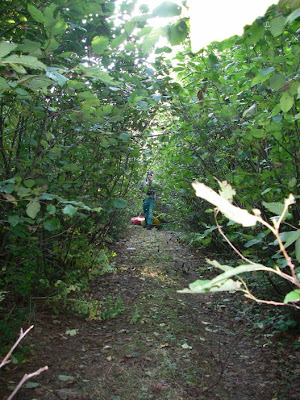 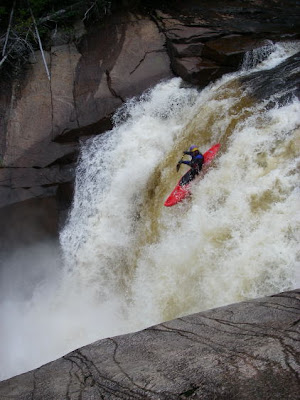 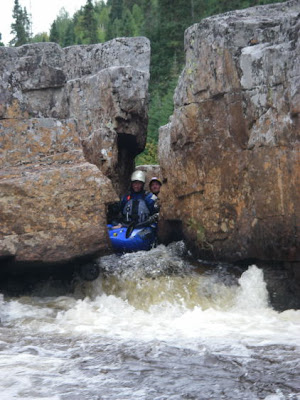 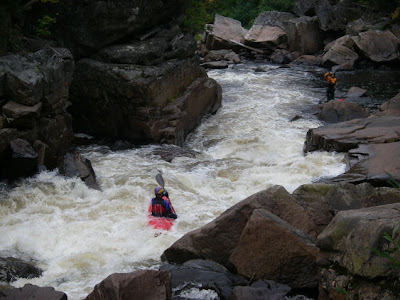 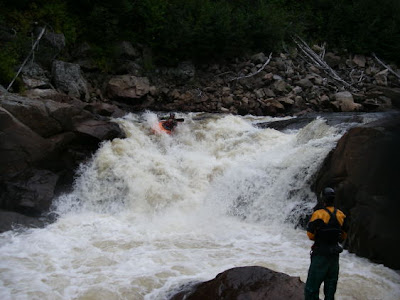 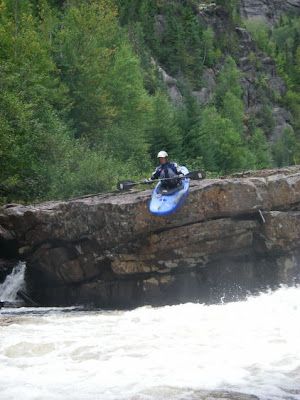 Cheryl showed some style when she ran the 30fter in perfect text book style.. 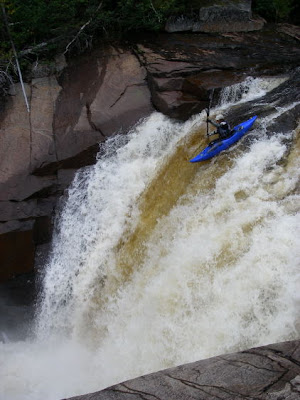 I (Cheryl) have to say the Malbaie quickly became one of my most favorites rivers, it is a really endurance test, a long hike in, 40+ drops of class 4/5 and a long hike out… I slept like a baby that night…
Waking too early Sunday due to time constraints, We hit the Tewkesbury still very bleary eyes and in a morning mist…we were off the river by 10am and Trip had his first beer and chips by 10.15 AM..
Next was the St Catherine a whole lotta flat water for 3 big drops…one didn’t have enough water so we had to opt for a easier route shocking 10 scouting paddlers by just running it without stopping.

We are now back in Burlington busy planning the rest of our trip and seeing old friends.

We have also sold Astro : ( who will be sent to her new home next week!! Looks like she’s going to be on another road trip.. 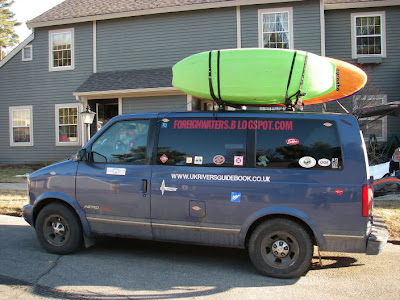 Posted by Si and Cheryl at 9:02 AM No comments:

Since our mammoth drive back East, we have returned to some of our favorite spots in the East. This has resulted in a nonstop 9 day tour of rivers in New York State and Canada.

First stop was the Black river in Watertown to dip our toes in the tepid waters at Hole Brothers. As usual the hole was great fun, with a little too much upside down action. 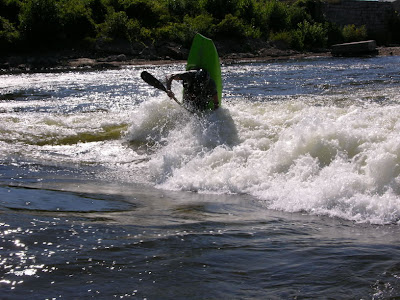 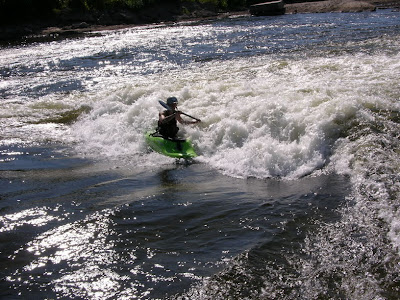 From there, we motored into Canada and a couple of days on the Ottawa. The level wa about -2, which meant that most of the good playwaves were in, but some were a little flushy. It was a little quieter than the normal summer levels, with a refreshing lack of massive eddy lines of rafts and other paddlers. 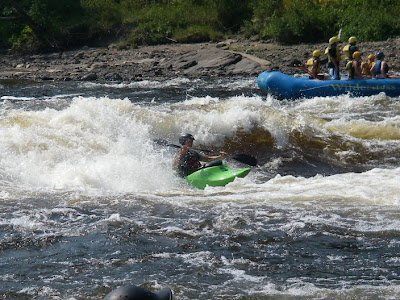 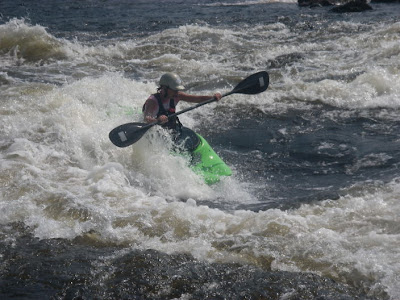 A return to the Black river, this time the Route 3 wave. It was a bit busier there, whereas we'd had Hole Brothers to ourselves, this time we had to share the wave with a class of rather good 11 year olds.... 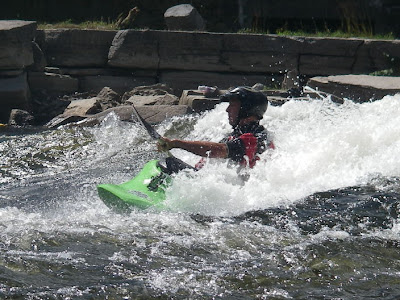 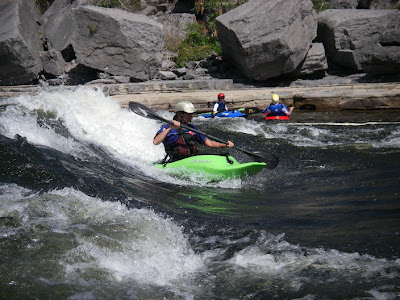 After the Black, we headed to the Beaver, one of our favorite North east rivers. For the three day labour day weekend, boaters from all over the North east, and further afield head to Upstate New York for this guarenteed water event. Four sections of river were run, The Taylorville, Moshier and Eagle sections of the Beaver, and the Stone Valley section of the Raquette. We met up with lots of our old friends, and made some new ones! The paddling lived up to expectations, and we witnessed plenty of carnage at Beaverator, and the other sticky spots... 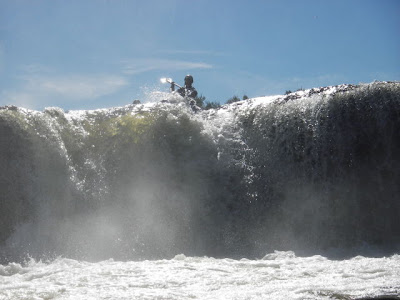 Cheryl about to run the 1st falls on Moshier 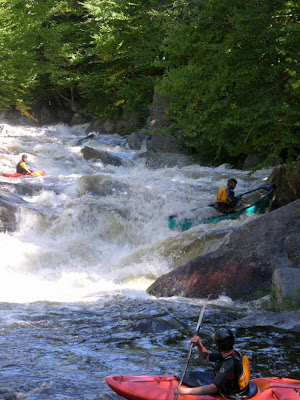 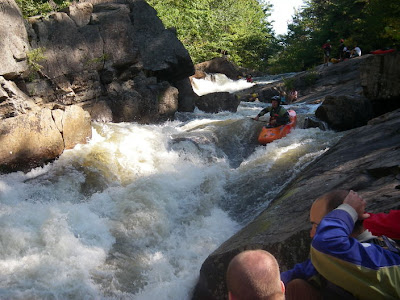 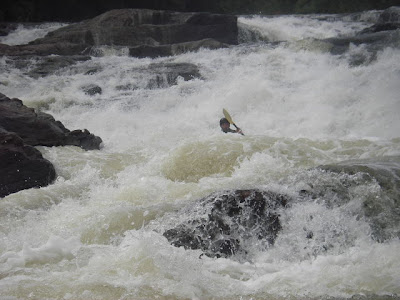 Will Running Colton Falls on the Raquette

From there, back to Canada and runs on the Gatineau, and Rouge river, which were rather relaxing, after the bustle of the Beaverfest.


Now we are heading towards Quebec City, and the Jacques Cartier river!!
Posted by Si and Cheryl at 9:34 AM No comments:

Si and Cheryl
We have just completed a 12 month round the world trip, and now its back to reality and work in the UK